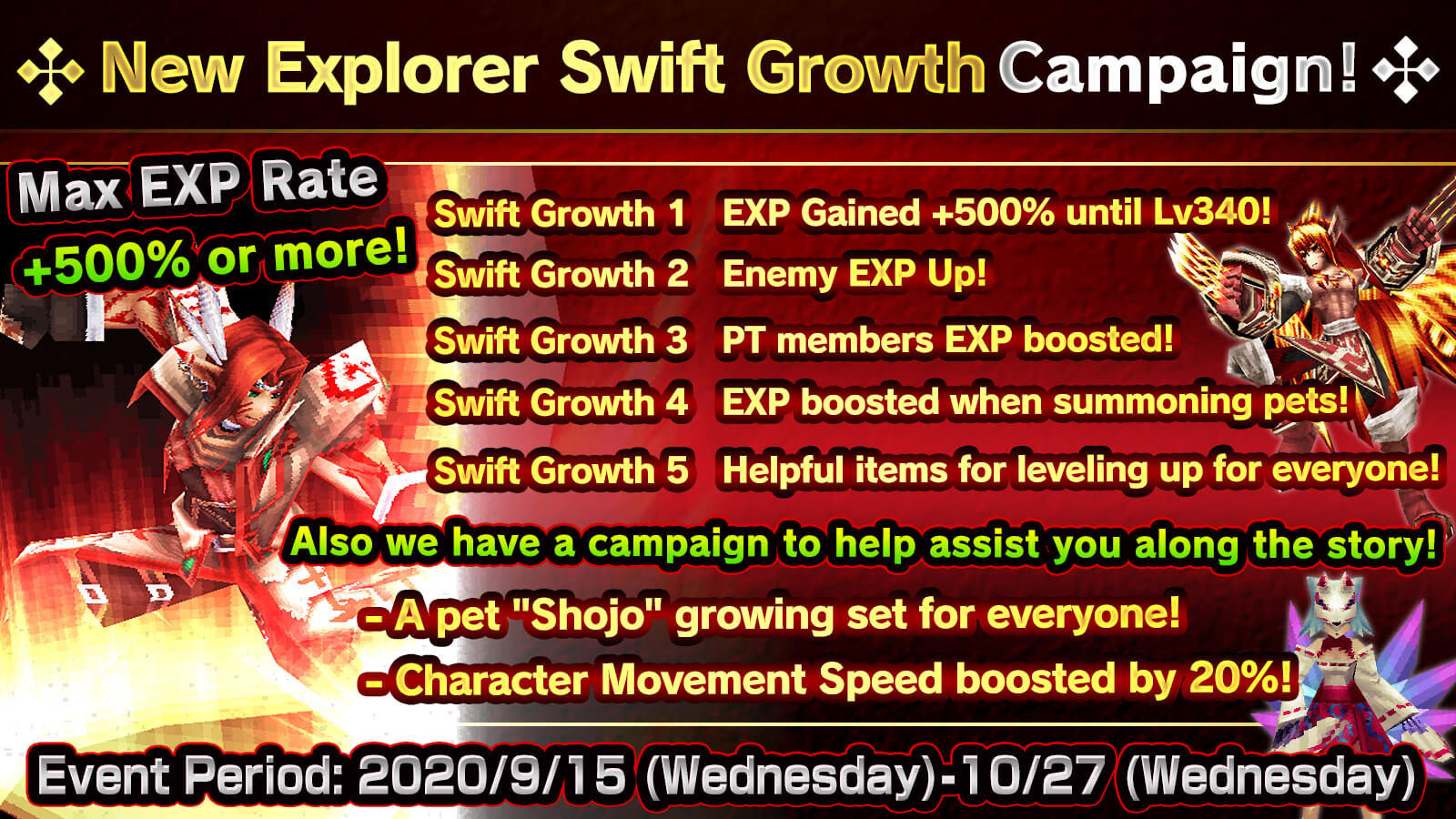 In order to make it easier for new to intermediate players to grow their characters, we are holding a cluster of great campaigns to boost EXP!

Also we have a campaign to help assist you along the story!
- A pet "Shojo" growing set for everyone!
- Character Movement Speed boosted by 20%!

We have raised the amount of EXP you can gain from defeating monsters within 20 levels of your own.
The larger the gap between you and your opponent, the more EXP you will get.

For example: If you are Lv 30, your opponents will be monsters between Lv 10~Lv 50.
- Swift Growth 3 -
PT Member Lv Gap EXP Boost Campaign is on!

EXP rate is boosted +50% when you are accompanied by a summoned pet.
- Swift Growth 5 -
Helpful items for leveling up for everyone!
Please receive these from the Item Shop.

- Dyett's Book -
Increases the character's EXP from monsters by 25% and you will not be targeted by active monsters.
Lasts 1 day.

*The effect will continue for 2 days in total including additional 1 day which contains the loss of playing time due to the maintenance.

- Fushy's Book -
Increases the character's EXP and Drop rate from monsters by 24%.
Lasts 3 hour.
- Other -
Also we have a campaign to help assist you along the story!

A pet "Shojo" growing set for everyone!
Please receive these from the Item Shop. 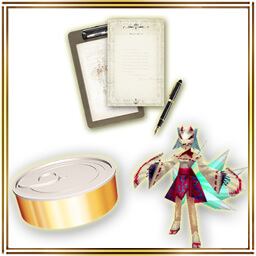 *Stacks with the effects of Dash, equipment, etc.

Only the server programs and resource have been updated.

The results of fortune-telling will be fixed as "5 Stars"!
The results affect your EXP gain, Drop rates, Stats and the element value of islands.
- Guild Creation Campaign is Held!

During the campaign period, Items and Spina for Guild Creation will be free.
Anyone can create a Guild at NPC "GM Neints" in Rokoko City when your Level reaches 30.
- Production+20% Boosting Campaign is Held!

*The campaign effect will be reflected in "Gold Dust", "Gold Pebble", "Gold Nugget" but there will be a certain limited on maximum success rate.
*Items used for production may be lost if production fails.
*Even in the case of strengthen, if the production fails, items of the material may be lost.
*Slot may be added to equipment depending on result of production.
*Please note that if the slot is lost, the Crysta that's with the equipment may disappear too.
*Success result, failure result, EXP lost and Item lost due to the failure, will be displayed in the Log so please check.
*If you produce an Item with lower productivity level than your own production level, EXP will not count.
*Recipe will not always be added when your production skill level rises. There are some levels where recipes will not be added.
- New Explorer Swift Growth Campaign -
In order to make it easier for new to intermediate players to grow their characters, we are holding a cluster of great campaigns to boost EXP!

Also we have a campaign to help assist you along the story!
- A pet "Shojo" growing set for everyone!
- Character Movement Speed boosted by 20%!

You can go to the event venue by talking to "Neints" in Rokoko City.
- Concerning Limited Function of the Main Menu -
During our update on June 26, 2019 (Weds) we adjusted the timing of the release of a portion of the main menu in the top right.

From the tutorial at the beginning of the game until the the mission "Monster Taskforce" is cleared, we have limited the available functions of the main menu on the top left.

By completing the mission "Monster Taskforce", all functions of the main menu can be used.

Until the mission is cleared, some of the functions of the main menu cannot be used.
- The following systems will be reset by deleting the app -
- Settings on Phrases
- The order of buttons in MENU

Please note that deleting the app will reset the settings above.
You will need to set again after re-installing the app.

Thank you for your cooperation.
Iruna Team

Detaches the equipped crysta once 100% of the time.

*You can extract 1 crysta with 1 Extract Crysta.
*You can use extracted crysta as a normal crysta.

"Open a box" discount price at your first-time purchase!!

You can dye the equipped Al Crystas with these crystas!

*Please note that the schedule is subject to change.
*You may get the same items by opening the boxes.